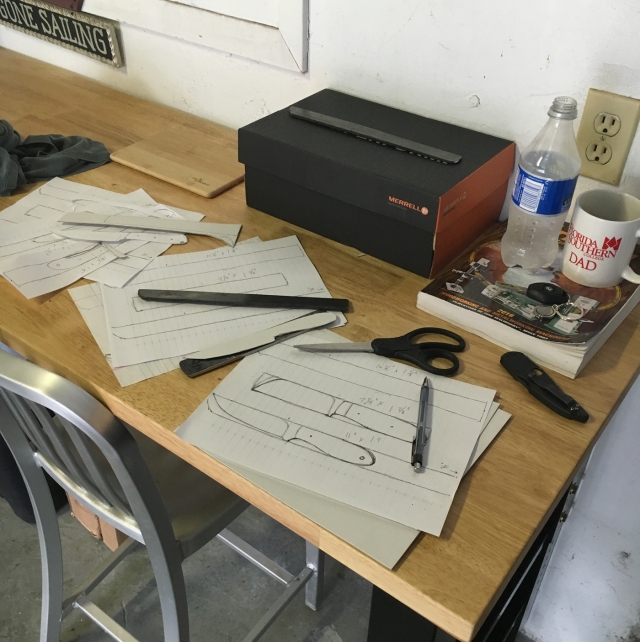 What do you want your knife to look like?  Your knife pattern should reflect not only the function you desire, but an aesthetic that is your own.  In past articles, I have shown an affinity for Asian-inspired blades.  Likely, that is from my half-Filipino heritage.  Or maybe I just gravitate to the lines.

For patterning, I began by tracing the outlines of the steel blanks I had purchased on plain paper.  I wanted to make blade shapes that conformed to the narrow Alabama Damascus I would use.  After exploring various patterns, to include wharncliffes, drop points, and bowies, I settled upon the basic kwaiken shape.  I reasoned that the straight topline would help by minimizing the amount of steel I would have to grind away.  And I like kwaikens!

I transferred the paper pattern to some stiff packing cardboard that had come out of one the shipping boxes from the tools.  I cut out the cardboard pattern for kwaiken #4 that I had made.  This shape was traced on to the steel with a Sharpie.  I will have to buy some Dyekem eventually to help give more long lasting markings on the steel for the profile and center line.

After the pattern was traced, I drilled holes just outside the ink lines to reduce the amount of time I would spend with hacksaw in hand.  Trust me, if you can afford a steel-cutting bandsaw, get one.  This project will definitely require some human exertion.

Butt end of the tang done.  Now for the blade’s outline itself.

Here is the rough cut of the first kwaiken.  I repeated this process for the other two blanks.  I reasoned that it would be easier to do much of the work on the three blades together at each step.  That would reduce the amount of time resetting tools and jigs.  The kwaikens do not look like much now, but the next step will be to clean up the profiles on the belt grinder.  More to come…