Columbia River Knife & Tool dispatched two new Lucas Burnley-designed fixed blade knives to Las Vegas for SHOT Show 2015.  The upper knife is called the Achi and the lower knife is the Akari.  Both knives have the same interesting acid-etched TiNi coating that was seen on Burnley’s Obake knife from last year.

Both knives have faux green same’ (rayskin) lurking under resin-impregnated cord wrapped handles.  Like that on the Obake, the plastic rayskin has glossy highlights over a matte textured background to give the same’ depth.  The neon green color makes the knives very visible and gives them an organic quality.

A glass reinforced nylon sheath has positive retention and allows the knives to be worn IWB.  Either a J-clip or paracord leash separate the steel from sheath when the knife is drawn.  The J-clip and paracord, with a shiny skull bead, are included with the knife. 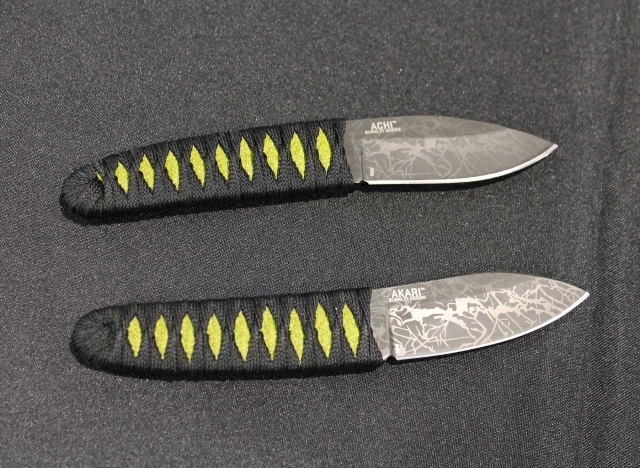 Achi and Akari are small utility knives, rather than the straight up defensive kwaiken that is Burnley’s Obake.  MSRP for either knife is $59.99.  As you can see, Burnley is influenced by a neo-Japanese look that is very distinctive.  It is a refreshing departure from the “high-speed, low-drag black-on-black tactical weapons systems” that many knives become.