Although I am now mostly an administrator, I still serve as a sworn police officer. As a hobbyist knife maker, I wanted to build myself a Thin Blue Line folding knife to represent my profession.

Contrary to some misguided opinions, the Thin Blue Line refers to those who stand to separate order from chaos. Lawfulness from lawlessness. Good from evil. You know, nice folk from criminals.

After Blade Show 2018 was over, I decided I would attempt to make a liner lock folder. As you have END_OF_DOCUMENT_TOKEN_TO_BE_REPLACED

Fictional MI6 secret agent James Bond, as both the literary character and the Sean Connery film version, has fascinated me for much of my spyless adult existence. In keeping with my homage watch theme, I decided to make a 007-inspired timepiece.

My parameters were a Submariner-esque dive watch with a particular band. The watch I was looking to emulate, imitate, impersonate sported a British Ministry of Defence-style nylon strap that Connery wore in “Dr. No” and “Goldfinger.” The 007 watch had to have a black band with olive END_OF_DOCUMENT_TOKEN_TO_BE_REPLACED

This is a nice vid of the balisong competition at BLADE Show 2018. It sure was fun to watch.

Best Moment of the Show 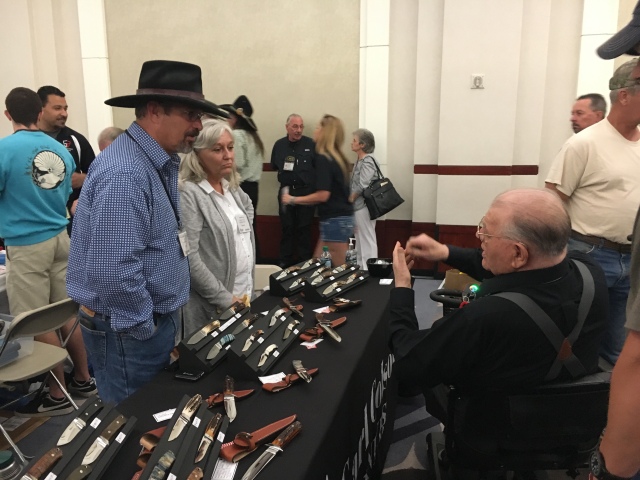 Hands down, my favorite moment of BLADE Show 2018 occurred as I wandered the custom makers’ tables. I overheard maker Carl Colson mention to show goers that he hailed from Florida. I circled back to his table and saw a man in a scooter talking to Colson.

The man was holding a small fixed blade Colson had built. It had a mirror-polished clip point blade and similarly finished bolsters. Colson told the man he would like to make it as a folder someday.

I stole a glance at the name badge. That man in the chair was A.G. Russell himself! Admiring the knife, Mr. Russell replied to Colson that if he sent specs, Russell would get it into production. 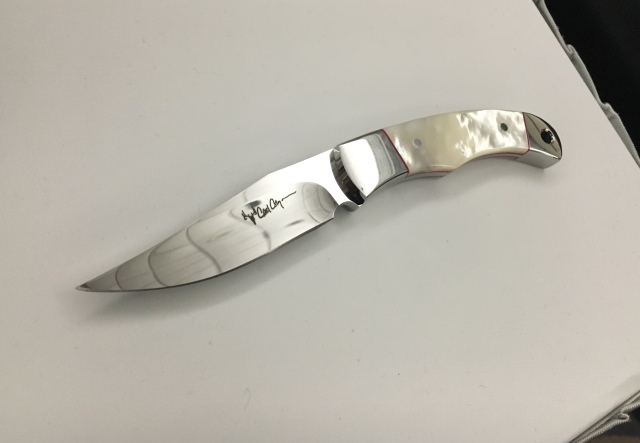 If I was Mr. Colson, I would have passed out. He and I locked eyes for a few seconds. The unspoken exchange was: Me, “Holy shit!” Him, “Oh my God, pinch me!”

This type of exchange that can really take a maker’s recognition to the next level. Mr. Russell was very nice and he apparently knows what he likes.

It was kind of amazing and just one of the things you might experience if you keep your eyes and ears on high alert.

(The reflections on the blade are from the ceiling. Believe me, it was perfect.)

Chuck Gedraitus taught us a balisong making class at BLADE Show. I photographed this Bowie-style butterfly that Mr. Gedraitus made and that he passed around as an example. This gent’s talent is unbelievable. He was a terrific instructor. This seminar gave us his insights into what he had learned constructing over 170 balisongs! 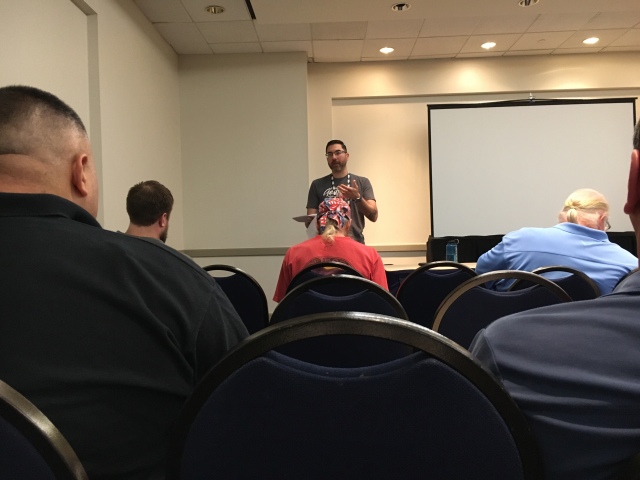 Though it was all above my skill level, he made it sound almost doable for a hobby maker such as myself. Almost.

Forty-eight competitors are flipping their fingers off at BLADE Show 2018!

The History of Buck Knives

If you are into Buck Knives, there is a 198-foot display at BLADE Show 2018 with the rich history of the Buck family and their legacy. 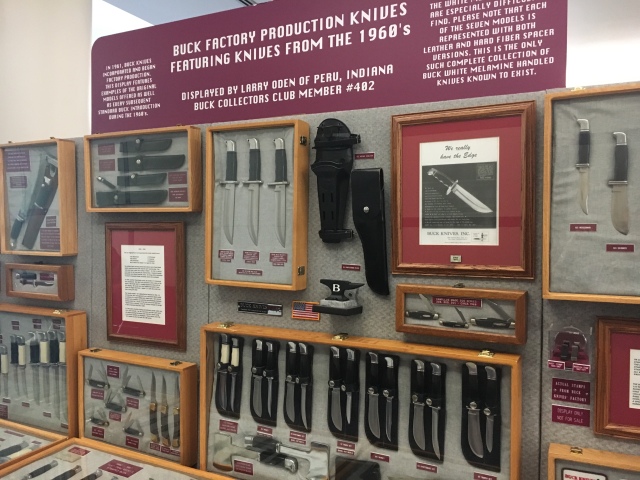 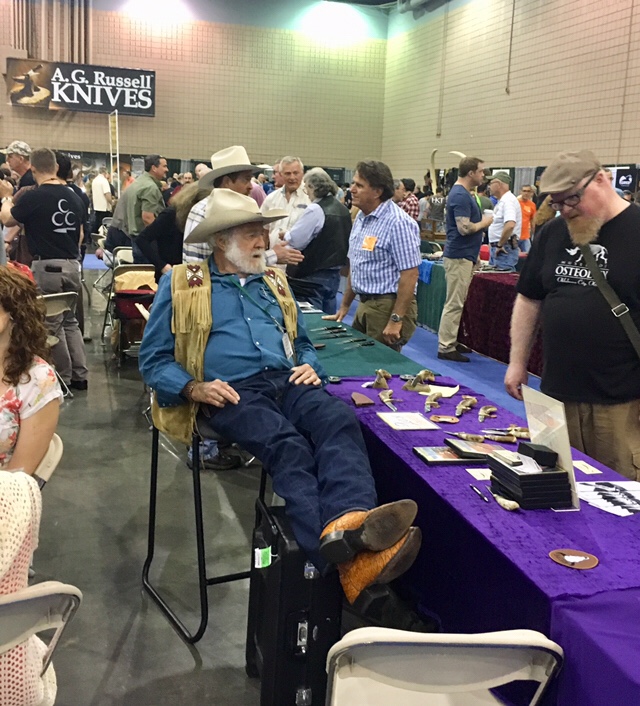 What can you say? He’s a legend and one slick dude.

This is the additional floor space where BLADE Show 2018 placed 200 more booths and tables in the John A. Williams ballroom, which is adjacent to the main exhibit hall.

I am shocked at how big this room actually is. The vendors in this room, to include a heavy hitter like Cold Steel, made it a pretty good show all on their own.

With nearly a thousand exhibitors, this year’s show is definitely the premier event in the knife world.

I was afraid the impending BLADE Show West (October 2018) would draw off some of the makers from faraway places such as Japan, but Kiku Matsuda, Hiroaki Ohta, and others were right where they were in previous years.

From the sheer size of today’s “Friday crowd,” you couldn’t dismiss the Forged-in-Fire-Effect the industry has been seeing–a renewed interest in making and collecting brought forth by the popular, and sometimes maligned, tv show.

Whatever the reasons, burgeoning vendors or pop culture promotion, it was heartening to see everyone from little kids to guys in mobility scooters plying the crowded aisles.

From this, to this: 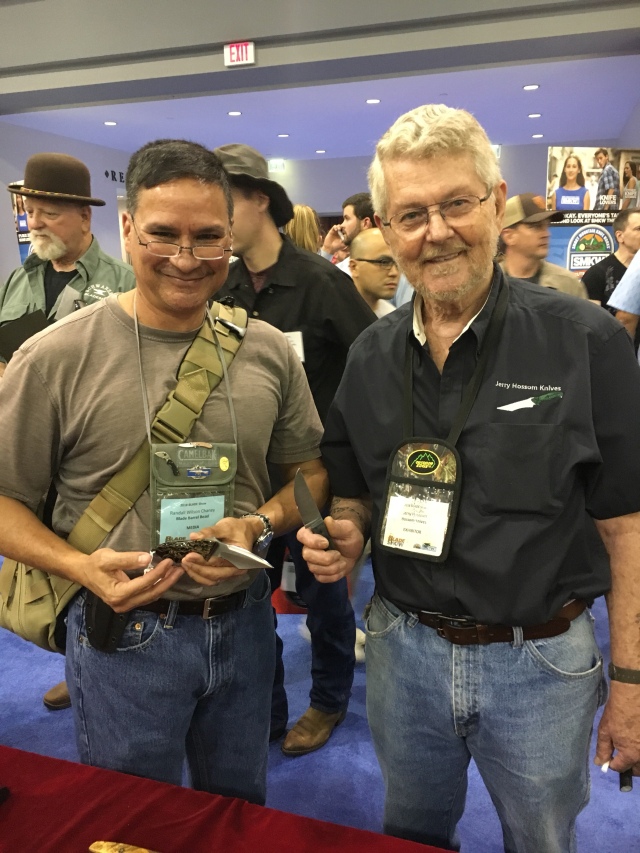 …already making friends! That’s Mr. Jerry Hossom, who does the most incredible grinds and finishes. Yeah, I got him to hold my knife. He was a good sport. This is one fun time.