Just after Blade Show 2014, I posted a Photoshopped image I had made of the Spyderco Ronin 2 prototype I handled in their booth.  Since the “Golden Bug” does not allow photographs to be taken of their protos at shows, I easeled one of my existing pictures of a Spyderco Yojimbo 2 and massaged its pixels.  The visual results were very similar to my notes and recollection of the proposed knife.

Spyderco has now released their own images of the soon-available Ronin 2, along with copy and specifications describing the new fixed blade.  Here is what we know.  The new Ronin 2 is more of a fixed-bladed Yojimbo 2 than it is a variation of original Spyderco Ronin, as designer Michael Janich had told me at Blade Show.  Despite the looks, there are differences.

At 7.88 inches, the Ronin 2 will be 5/16th inch longer than an opened Yojimbo 2, but Ronin’s blade, 4.12 inches, will be just over 1 inch longer than the folder’s blade.  So the Ronin 2 will have a greater blade-to-handle ratio than a Yo2.  If I recall correctly, Mr. Janich told me he de-emphasized the pommel as a striking surface on the Yojimbo 2 from its original Spyderco version.  In handling the Ronin 2, I found the short, modified butt provided a nice thumb shelf in the reverse grip, edge out hold, but it was not pronounced as a striker.

I had some trouble recreating the butt of the Ronin 2 in my manufactured image because I remembered how the prototype felt, but not exactly how it looked.  Now I remember!  I checked my notes and the prototype had three bolts holding the G-10 scales to the tang, unlike the two in the pre-production knife pictures. 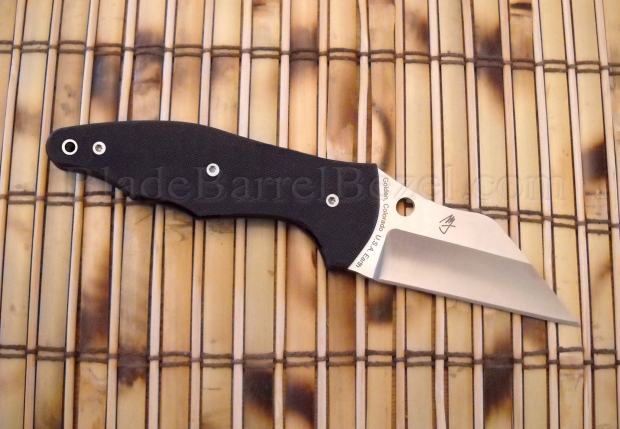 Ronin 2 image made from my Yojimbo 2.

Ronin 2’s CTS-BD1 stainless steel does not quite have the edge-holding abilities of Yo2’s CPM-S30V steel, but the Carpenter BD1 is very high in chromium, so it will have superior corrosion resistance.  This is advantageous in a knife that will be carried close to the body.   Since the Ronin 2’s mission is more defensive and less utilitarian, the choice of steel would seem appropriate.

My overall impressions from gripping the prototype Ronin 2 at Blade Show were that it felt thin in cross section, solid in the hand, and quick to manipulate.  It would appear that not much has changed since then.  Here is the narrative from Spyderco:

Personal-defense authority Michael Janich popularized the wharncliffe blade shape as a self-defense tool with his original Spyderco Ronin design. Now that concept is back and better than ever with the new Ronin 2. Designed to cut with unrelenting power all the way to the point, its broad straight-edged blade is hollow-ground from corrosion-resistant CTS-BD1 stainless steel. Exceptionally thin, textured G-10 scales bolted to the full tang guarantee a secure grip and superior edge orientation, while an understated integral guard protects the hand from the sharp edge during thrusting tactics. Slim, flat, and weighing less than four ounces, the Ronin 2 rides discreetly in a custom-molded Boltaron sheath. A versatile G-Clip attachment supports a wide variety of belt and inside-the-waistband carry positions, allowing you to easily tune your carry of the Ronin 2 to your personal needs and tactics.

As an owner of several Janich-designed blades, I am stoked about the Spyderco Ronin 2.  It has an MSRP of $149.95, but I just pre-ordered one from KnifeCenter.com for less than a hundred dollars.  I can’t wait for it to be shipped.