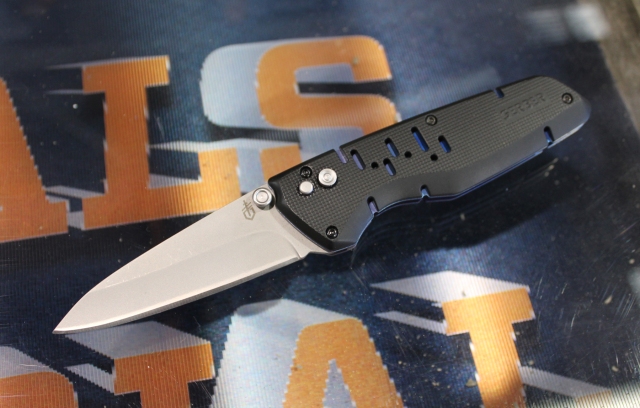 I posted photos of Gerber Legendary Blades’ Dime Traveler earlier this month.  Here are some more new knives for 2015 that I was able to see at their SHOT Show booth.  The first knife is the Skyridge.  It has a 3.3 inch blade that is actuated by Gerber’s FAST 2.0 assist system.

Skyridge has dual thumbstuds, a plunge lock with safety, and nice blue anodized liners under G10 handle scales.  The blue pattern under the black scales is called “slanted rain” by Gerber.  It has a very unique look to it.  The MSRP will be $44.99.

The folder below is Gerber’s new Air Ranger, designed by Oregon knifemaker Bill Harsey.  Harsey has a long history working in collaboration with such military legends as Col. Rex Applegate, Special Forces NCO Al Mar, Chief “Patches” Watson, among others.  Although the Air Ranger has been around for a few years, this version has G10 handles, which give it a better grip when wet or slippery. 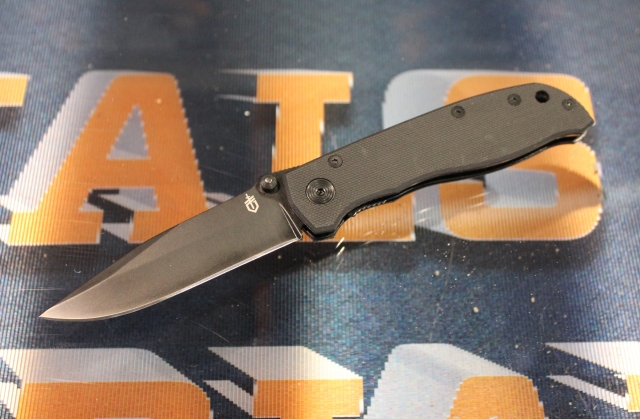 The Air Ranger’s 3.3 inch clip point blade is subdued with black oxide.  This knife is a liner lock and is light at 2.6 ounces.  MSRP will be $39.99.  Air Ranger will also be available with a green G10 handles and a gray blade.

Our next knife is a gentleman’s folder called the Airfoil.  I thought this little guy was eye-catching.  Gerber says its handle emulates the shape of an aircraft’s wing.  Yeah, I can see that.  In the same vein, it also reminded me of a feather or a bird’s wing.  The 2.7 inch drop point blade continues the look when opened. 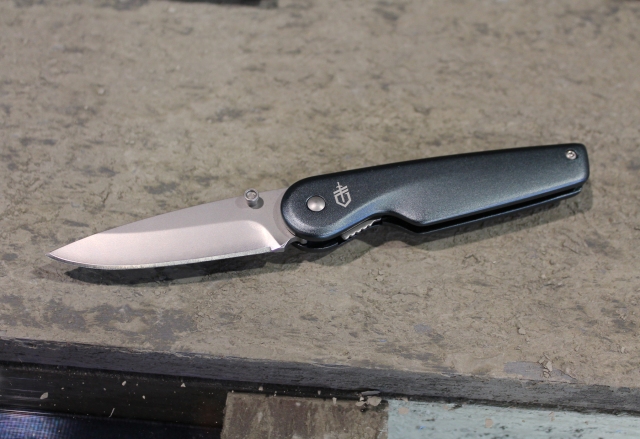 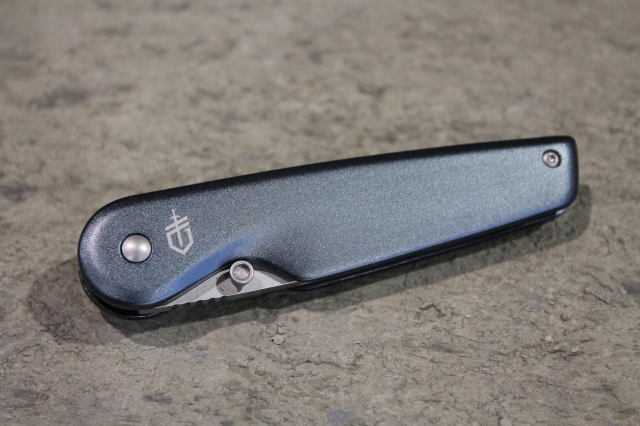 The aluminum handles are said to be gray, but in the artificial light of the Sands Convention Center, there was a blue sparkly quality to the surface.  It gave the knife some visual depth.  This little liner lock will have a retail price of $22.99.

Bringing up the rear in our tour is Gerber’s Strongarm fixed blade knife.  This is a military, police, and outdoors blade built for hard use.  The Strongarm is Made in the USA.  Portland, OR, USA to be exact.   This is confidently etched onto the blade in large letters.

Gerber’s Strongarm has a 4.875 inch blade of 420HC steel.  It is a full tang fixed knife with a black ceramic coating.  The grip is a firm rubber with diamond-shaped patterning.  At the butt is a striking point and a lanyard hole.

The hard plastic sheath for the Strongarm is made to mount vertically, horizontally, or dropped on 1.75 inch belts or affixed to MOLLE-equipped gear.  The sheath has friction retention and a supplemental snap loop on the grip to keep the knife safely encased.

The Gerber Strongarm comes in either Black or Coyote Brown and with or without serrations.  American-made quality comes at $85.99 or whatever discounted prices you can find from retailers.

All folder prototypes handled well and operated just as they should; blades locked up correctly and the FAST assisted-opening system displayed the proper pop.  In my opinion, a heavy duty fixed blade knife requires a full tang and the Strongarm has one.  Gerber showed off some good products for 2015.