This is my favorite folding knife of SHOT Show 2015.  Bob Terzuola, a founding father of the tactical knife, has joined with Columbia River Knife and Tool to make what is essentially a version of his iconic Advanced Tactical Combat Folder (ATCF), the BT-70 folder.

Mr. Terzuola spent his early life in Central America on Peace Corps, U.S. government, and commercial adventures.  His exotic experiences gave him an appreciation for working knives.  In the early 1980’s, he began making knives and selling them to those who travel abroad in service to our country, both combatant and clandestine.

The word “iconic” is not hyperbole for Terzuola’s original ATCF.  With its liner lock, signature blade shape, and first-rate materials, the mid-1980’s ACTF was a blueprint from which later makers derived inspiration.  Terzuola is credited with inventing the term “tactical knife.”

CRKT’s BT-70 has the ACTF’s pedigree with a few annotations.  The 4″ AUS 8 modified tanto blade has two different grinds.  There are steeper bevels from the tip of the tanto back to about the middle of the blade.  A larger V gives more steel at the rear of the blade for a thicker edge.  Presumably, the front half would excel at precise cutting and the back half for hacking or chopping.  A prominent fuller graces both sides of the double-ground blade. 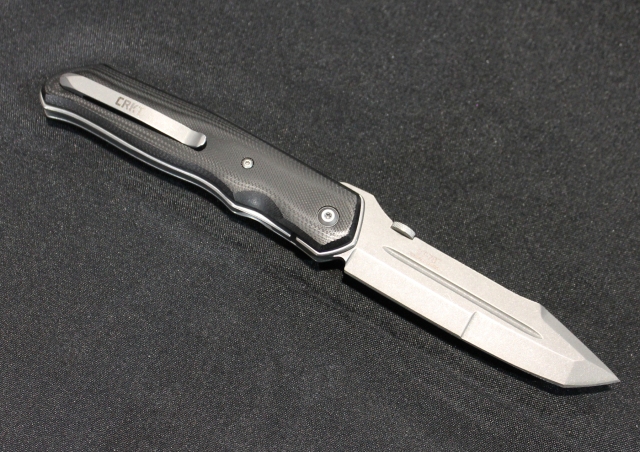 BT-70’s G10 handle scales are beveled and bolsterless, but the left side one is adorned with a relief-cut Chinese dragon’s head, which is Terzuola’s logo.  This look is badass.  The G10 covers up full steel liners.  A pocket clip carries right-handed tip-up only and looks to be bolted on from beneath the scale.

This is a big knife at 9.1″ open and 5.15″ closed.  The large blade and full steel frame result in a pocket-tugging 7.6 ounce weight.  But its weight is right for a knife of this stature.  Terzuola’s work has a substantial look and feel.  His designs are very recognizable.  The BT-70 is obviously one of his products.

The CRKT BT-70 is available for pre-order from a number of sellers a this time.  It will retail for $150.00.  Not a hefty sum to own the work of one of The Masters.