Making a Kydex Sheath and Paddle

In preparation for BLADE Show 2018, I needed a wearable sheath for my SWAT Knife. The original sheath I had made had no real provision for mounting. I had to do something soon since BLADE is close and I wanted to show off my knife from the hip.

Rummaging in my cave of junk, I found an old paddle mount for a BLACKHAWK! Kalista fixed blade knife I had bought decades ago. If I fashioned a new flat-backed sheath out of Kydex, I could drill the holes to match the paddle and I would be in business.

Into the kitchen with a sheet of .060″ patterned Kydex, thermoforming foam, tongs, and only moderate patience. The process usually drags out for five or six attempts to get a sheath molded to my liking, however, this time the shape turned out just right…in only nine tries.

I drilled the holes, riveted the halves, and screwed on the BLACKHAWK! paddle. Hey, it worked! I was done. Or so I thought. My wife came home. “I just made this sheath for BLADE Show!” I proclaimed. As she examined it, I added, “Well, I didn’t make the paddle, though.” Uhhhh. Nope. The whole sheath, like the SWAT knife, had to be made by my own hands. 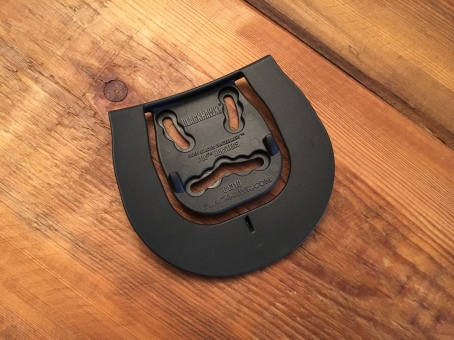 The gears in my head started to slowly grind. The paddle needed a convex shape to match the hip. But it needed a flat section to mate with the sheath. How could I do this in a single molding process? These things I would have to ruminate.

A few days later and with a plan in mind, I proceeded. I found a cylindrical vase roughly torso-sized. I grabbed a .125″ piece of carbon fiber for a backing of the drilled part of the mount. I cut the kydex in a round for the paddle and a rectangle for the mounting section. I had to pre-drill holes, since once formed, I could not do it.

After heating the plastic, I laid it over the cylinder and folded back the mounting portion. Hmmm, that seemed to do it. I riveted a small bent rectangle of Kydex to the back of the paddle to snag clothing when pulled up to keep the rig from sliding out easily. 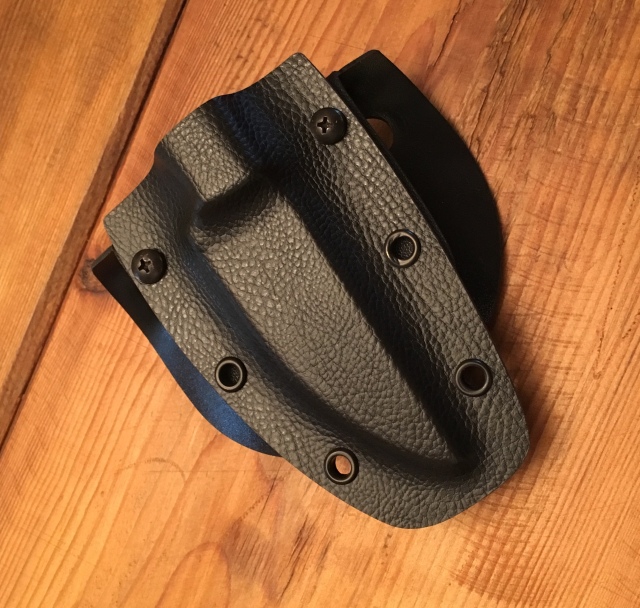 All done! For real this time. Ready for the Atlanta adventure.