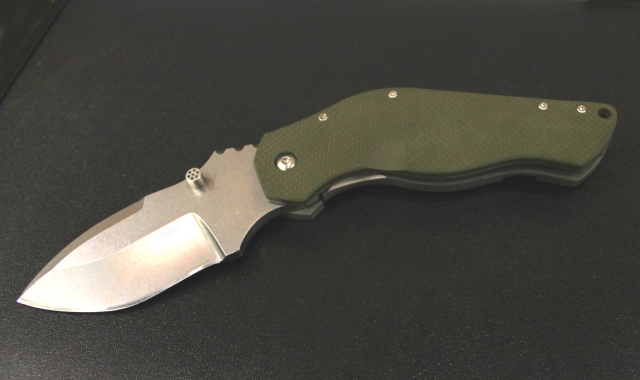 Sniper Bladeworks is a company founded by former law enforcement officer Lance Abernathy and veteran knifemaker Jody Muller.  I learned a secret when talking to the guys at their Blade Show booth:  most Sniper Bladeworks knives have names derived from Grateful Dead songs.  DMF–Dear Mr. Fantasy.  DF–Dark Hallow.  Now along comes the VLB–Viola Lee Blues.  Even the SBW logo is an homage to the Grateful Dead skull.

Not a Deadhead myself, the allusion is somewhat lost on me, but Sniper Bladeworks’ bold designs are not.  A signature feature of their folders is the handle to blade angle that brings the point down and allows the user’s wrist some relief in a forward grip.  Couple that with the large proportions of a SBW folder, and you have a handful of metal and laminate that is comforting to wield on the job or if in peril.

Of late, I have been showcasing some collaborations between small shops and production companies.  The VLB is yet another.  Sniper Bladeworks worked with Boker to bring this production version knife to the marketplace.  I examined and photographed the VLB over at Boker’s booth, then I scurried back to Sniper Bladeworks for their take on Boker’s prototype.  The SBW guys were highly complimentary that the proto maintained their vision and had excellent fit and finish.

Boker will make the VLB with a titanium framelock, 440C blade, and G-10 left side handle scale.  A pocket clip gives tip up, right side carry.  Interestingly, the knives are set to be made in Argentina, according to the Boker rep.  I was told the Boker Plus VLB would be shipping in July for under $200.00 MSRP. 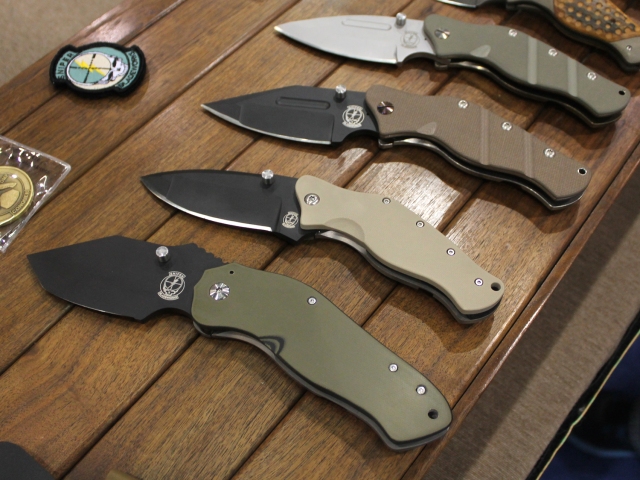 The Boker Plus version of the Sniper Bladeworks VLB should be another successful marriage of companies.  On a sidebar, the Dead having recorded somewhere in the neighborhood of 501 songs (original or cover), Sniper Bladeworks will have numerous abbreviations from which to name their future creations.