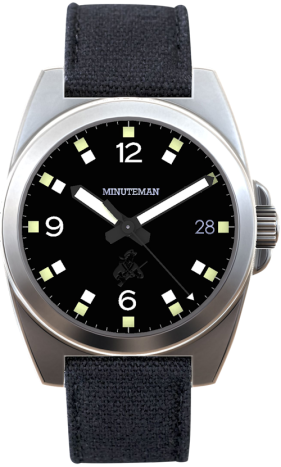 Minuteman Watches has a new 2016 model coming to the market: the Independence.  Designed by Chris Wiegand, who owns both Wiegand Custom Watches and the Lum-Tec Watch Company, the Independence will be proudly assembled in Mentor, Ohio.

For those of you unfamiliar with Minuteman, they are a company that contributes 25% of their annual net profits to charities assisting Veterans and their families.  The Gary Sinise Foundation has been one of their charity partners.

Some details about the Independence:

The Independence’s regular price is $309.00.  For a limited time, Minuteman is selling them for $250.00 and at $275.00 for the black PVD Independence (above).  Contact info@minutemanwatches.com for sales assistance.  Minuteman hopes to ship the first Independence watches in the Summer of 2016.

This entry was posted in Watches and tagged Minuteman Watches. Bookmark the permalink.