Steampunk.  It evokes images of an alternate reality, where the use of 19th century technology dominates a timeline in which the retro is modern.  Picture in your mind’s eye wood and brass replacing carbon fiber and stainless steel.  Analog verses digital.  That’s what I see in Szanto’s new 4100 series.

As I have previously related, Barry Cohen, Szanto’s owner/mastermind, has sought to bring turn-of-the-century design to the marketplace.  When I saw the 4102, I was immediately reminded of an old style gauge from a creaky merchant marine ship or even a ’60’s sci-fi spacecraft.  Antique distressed “brass” housing, ivory dial, and stitched brown leather band–perfectly Steampunk.

I could not help but order a 4102 because of its interesting appearance.  When the timepiece arrived in Szanto’s unique traveling trunk box, I was not disappointed.  The watch has classic looks and the modern machinery to back it up.

The 4102 is a large watch at 46mm overall case diameter with a 24mm wide calfskin band, but even for my smaller wrist, it wears well.  The case is actually made of stainless steel, despite its bronzed appearance, and is water resistant to 100 meters.  After a few months of use, the bronze finish is unscathed. 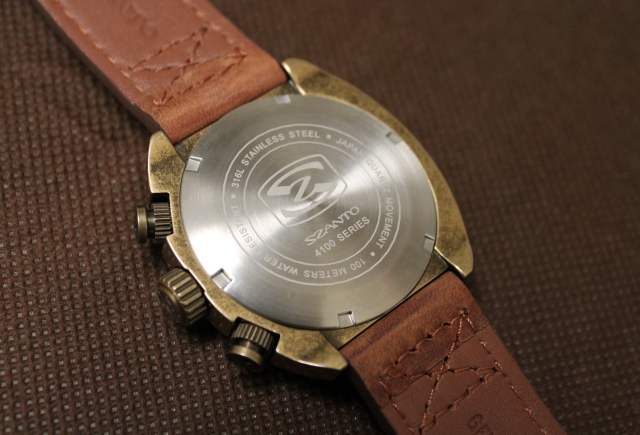 A chronograph, the 4102 has industrial-looking buttons surrounding the substantial screw down crown.  The buttons functioned perfectly to launch the timer’s hands into motion, reign them in again, and bring the hands back to center.  The start/stop button hard clicks on initial activation and soft clicks thereafter.  The zeroing button hard clicks each time.

The dial is ivory colored with black hashmarks and dot indices.  The main hands are gold with luminous centers.  A triangular 12 o’clock index and dots are similarly lumed.  One thing that did not float my airship was the tiny size of the date box.  I found it too diminutive for me to read without cheaters and not in keeping with the other bold features of the watch.  A small complaint.

The 4102’s movement is a Miyota quartz two-eye date chronograph.  I am a fan of the hash-marked tachymeter around the bezel, which adds to the handsome look, though I doubt I will be timing rockets with it.  Another nice touch is the slightly domed, hardened mineral crystal.  It gives the watch a little extra shape and a luxury feel.

Also available with a black or dark brown face, the 4100 series retails at $350, but some on-line hunting can bring this down quite a bit.  I suggest you view the entire Szanto line.  There are many designs to choose from and one will surely capture your imagination, Steampunk or otherwise.

This entry was posted in Watches and tagged Barry Cohen, Steampunk, Szanto Watches. Bookmark the permalink.