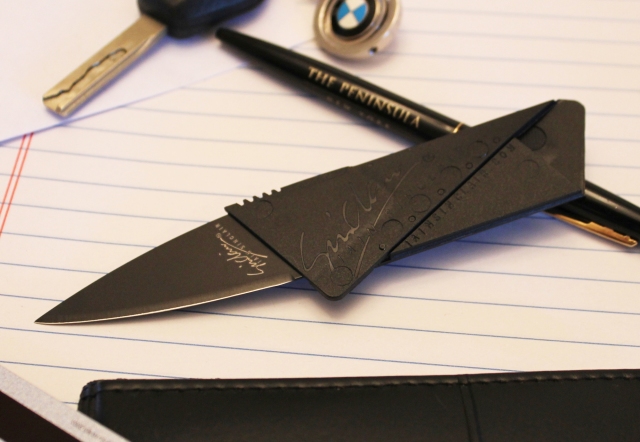 I have this friend at work who I think is the Most Interesting Man in the World—real life version.  While I cannot divulge what I know of his past, think of someone who has traveled the globe in service to his country as both a Super Soldier and as an Agent of Freedom.  He is equal parts roughneck and bon vivant.  His days as an active participant are over, but his current co-workers shy away when he is…perturbed.

One day, this friend said he had a knife to give to me.  I expected one in the “Tactical Bowie” arena.  Instead, he handed me a thin cardboard package that looked like it contained a very small music CD.  The understated black matte logo on the cover said Cardsharp®.

I was puzzled when I opened the pack and that was appropriate since the Cardsharp folding knife is something of a literal puzzle in itself.  Cardsharp is a credit card sized metal and polypropylene device that articulates to form a 2 ½” stainless steel cutting edge affixed to its sheath/handle.  Total weight= 0.49 ounces!

My gift was a Cardsharp, version 2.  Cardsharp2 has a rotating catch that locks the blade into its sheath for safety and to protect the edge’s sharpness.  By turning the catch to release the blade, three folding maneuvers turn the small knife into a virtual fixed blade for light cutting chores. 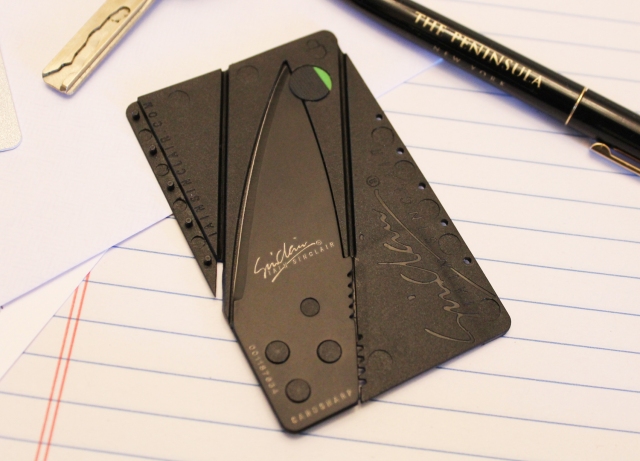 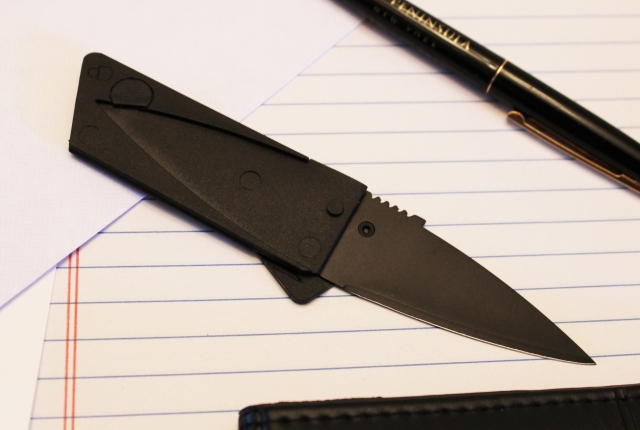 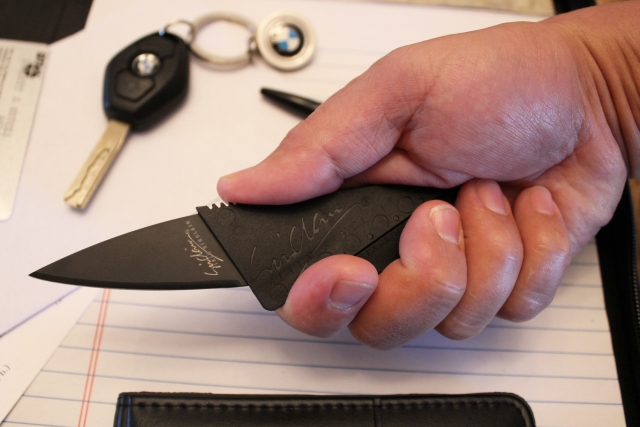 Cardsharp states the polypropylene hinge structure “allows infinite numbers of folds through 180 degrees without the hinge cracking and this feature is therefore guaranteed for life.”  Mine has showed no signs of fatigue.

The drop point utility blade is very thin and has a saber ground edge.  It is extremely sharp out of the box, which would be fitting for a knife that was originally designed to be a disposable scalpel for medical use.  The “sheath” would allow the blade to be thrown away without the necessity of a sharps container (though bio-hazard protocols should be observed).  Neat!

The latest polypropylene version of the Cardsharp, version 4, has further safety locks to secure the knife both open and closed.  Cardsharp2 can still be found on-line.  Both have a price of less than fifteen dollars.  A recent press release unveiled the new aluminum bodied Cardsharp, which looks very sturdy.

Cardsharp is one of a host of unique products from the Iain Sinclair design house, several of which are on display at the Museum of Modern Art in New York.  The cool factor of this knife sends it into the realm of spy gadget!  And since it was given to me by a real live spook, then it has earned its bona fides.

This entry was posted in Knives and tagged Gentleman's Knife. Bookmark the permalink.