At the outset of World War II, the German government commissioned five watchmakers to produce the Luftwaffe’s Fliegeruhr and B-Uhr aviator watches.  “Fliegeruhr” means pilot’s watch.  B-Uhr is short for “Beobachtungs-Uhr,” or observer’s watch.  Both watches were a gigantic 55 mm in case diameter, for best visibility and for strapping over a flying jacket and gloves.  Faithful replicas of these two timepieces are made by many manufacturers.  Laco is proud to be one of the original five WWII aviation watchmakers.

Today’s Laco Flieger and B-Uhr watches, sometimes called the Type-A and Type-B, respectively, radiate the same industrial instrument-quality good looks as the vintage issued ones.  I wanted a Laco watch and agonized over which one of the two dial designs I would purchase.  I settled on the B-Uhr.

Vintage Flieger- and B-Uhr’s had cases that were 55mm X 16.5 mm, and weighed 6.4 ounces (185 grams).  Impractical for today’s casual wearers, the gargantuan proportions have been scaled down to 42mm X 12mm.  Lacking a rotating bezel, the Laco’s stainless steel case still seems huge because the crystal reaches from side to side.

The black dial’s face is marked “Laco 1925.”  With a prominent arrow at 12 o’clock, there are Arabic numerals for seconds on the outer circle and smaller markings for the hour in the inner one.  The dial markings and hands are luminous.  In the dark, the very bright phosphorescent second markings reflect off the inside of the case giving a stunning effect!

Depending on the model, a new Laco may contain a Ronda, ETA, Miyota, or other internals.  My watch has a Miyota 8215, a 21 jewel non-hacking automatic movement.  The movement can be seen through the display case back, which is marked mineral crystal and 5 ATM (50 meters pressure resistance).  A beautiful onion crown allows the watch to be hand wound.

I am not terribly concerned with absolute accuracy with the timekeeping.  My B-Uhr will only be worn infrequently, so the time will be set prior to use.  This being the situation, I did not subject the Laco to U.S. Naval Observatory comparison.  It appears to keep good time and I would attest that the Miyota runs much less than the claimed 20 to 40 sec +-  per day.

The brown leather pilot’s strap has the Laco name engraved on the buckle.  It is sized for larger wrists; I have to use the tightest setting in the strap since I have a small wrist.  The band is riveted and stitched with Germanic precision. 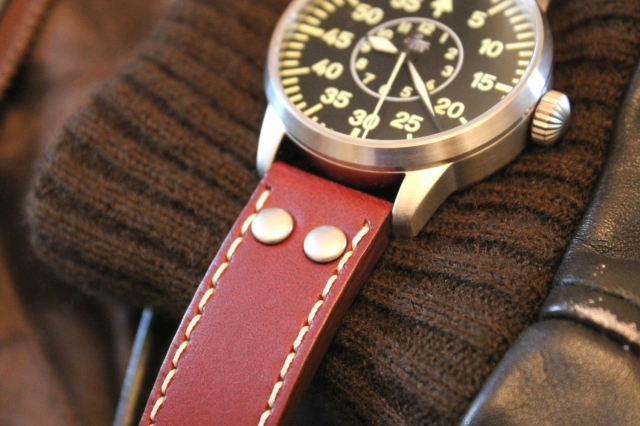 My Laco came with a mineral crystal.  I have no intention of putting this timepiece to hard use, so the downgraded glass was welcome–it lowered the cost.  Of course you can get a Laco with the sapphire crystal and better movement, if you wish.

When the Laco arrived it was packaged in a zippered leather case, which had the Laco logo embossed into the cover.  All was contained in a quality box.  Unveiling the B-Uhr was an experience in itself. 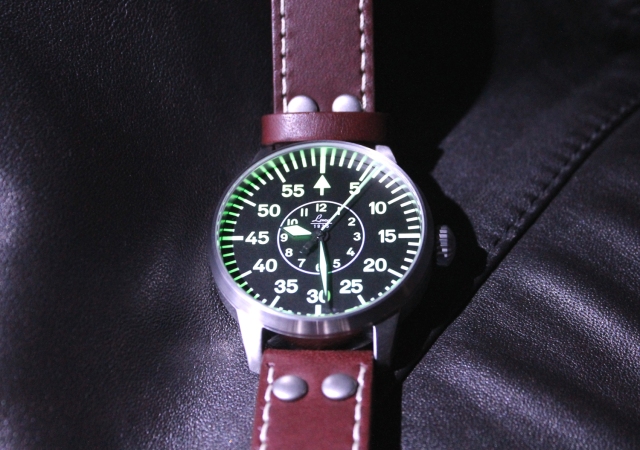 I paid $270.00 for this watch.  I am deliriously happy with its purchase.  At first, I was a bit daunted by its imposing circumference.  Wait a sec, the guys at work are sporting huge Nixons as “fashion statements.”  I wanted this watch for its historical look and feel, so I am only concerned with how I think it wears.  I love it.