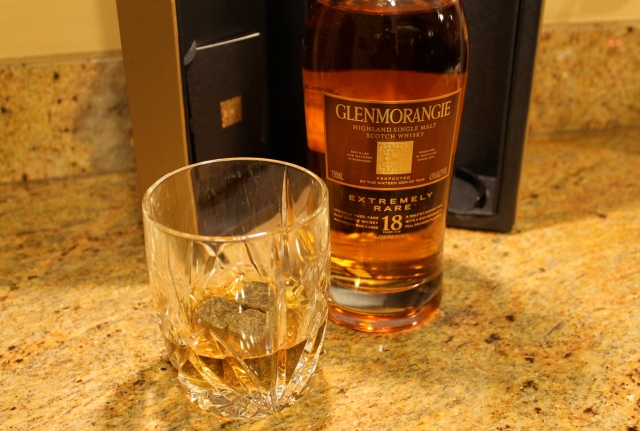 Some of my co-workers came into the “cube farm” the other day and gave me some Christmas presents.  Apparently I am not a total ass as a boss.  The larger package gurgled, so I begged off and told them I’d open that one at home (non-permissive environment). The second box contained four nice Waterford tumblers.  Sweet.

Back at home when the red wrappings came off the first present, I felt my workers must really, really like me:  18 year old Glenmorangie!  I like scotch whisky, but I have never had this one.  The suspected ringleader of the guys had told me that it was his favorite, so there you go.

I am no gastronomical connoisseur of fine single malt scotch whiskies.  I do know what I think tastes good to me.  So here are my thoughts on the Glenmorangie 18.

From Glenmorangie:  “The 18 Years Old is a single malt Scotch whisky of serious distinction. Once it has spent fifteen years maturing in American white oak casks approximately 30% is transferred into Spanish Oloroso casks to spend a further three years maturing. Then, when both elements have reached 18 years, we blend them back together to create a whisky with a rich bouquet and full, rounded flavour.”  A bottle of the GM 18 will set your credit card back about a hundred dollars.

I found this 18 to be exceptionally smooth and enjoyable.  While I don’t mind less refined, and sometimes harsh, 12 year old single malts, a good whisky like the Glenmorangie 18 makes me feel special–which is what my workmates had in mind!

This entry was posted in Spirits and tagged Glenmorangie Scotch Whisky, Scotch, Whisky. Bookmark the permalink.